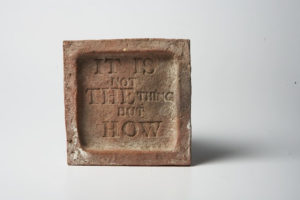 As part of the Depot’s commitment to celebrating, protecting and documenting Devonport’s distinctive cultural identity, we wish to publish a book containing collective memories of Barry Brickell’s life here. Barry, (d. 23.1.16), was an iconic potter, conservationist, engineer and railway enthusiast and a significant part of Devonport’s cultural life in the 50s-60s and  recently, over the past 5 years as resident of MKWC. Barry is meaningful to our cultural heritage –  his work has a significant presence in Devonport Library and Museum, and so far more than 30 have contributed, or will contribute their memories to be part of a publication.

A publication that celebrates the life of an iconic NZer, potter, railway enthusiast, engineer, writer and conservationist, Barry Brickell, whose formative years were in Devonport and who maintained a strong connection with the community here.

The publication titled ‘It is Not the Thing But How’, a favourite saying of Barry’s that sums up his philosophy of life, comprises the memories of Barry and his contribution to Devonport both past and more current, with contributions from friends, associates and collaboraters aged between 15 and 80 years.

In describing Barry as a great Aotearoa NZ Vernacularist the book will also represent his concern that Maori were honoured as tangata whenua. Much of Barry’s work was in respect of our indigenous cultural heritage and some of his work in relation to this will feature, such as a submission he made to Auckland Council about the representation of tangata whenua at the gateway of Auckland through the construction of a hakari, along with some of his own writings.

The Depot is again working with TGS student Loretta Riach to create a publication accessible to all generations.

This publication is made possible with the generous support of the Devonport Takapuna Local Board.