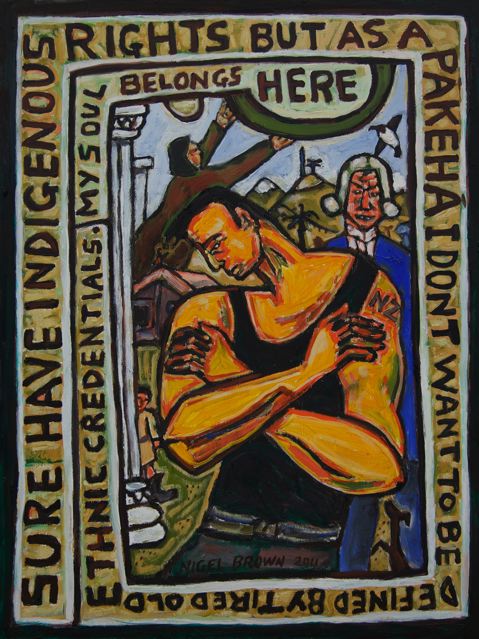 Nigel Brown and the Museum of the Vernacular

Coinciding with the Cultural Mapping Project exhibition ‘Sum of the Parts’ in August is the launch of the Museum of the Vernacular.

When we began considering what the logo might be for such a place we thought of the painterly hand-written aspect that can be seen in the work of several of our most renowned New Zealand artists. Visual artists themselves often use these hand-written elements in reference to the work of their literary counterparts. These recurrent motifs may be considered distinctly New Zealand or vernacular and so what better way to represent the Museum of the Vernacular than in this tradition.

With this understanding we entered into a dialogue with artist and Cultural Icon Nigel Brown about the possibility of him creating a logo for the museum.

A painting by Nigel Brown from 2011, dimensions unknown.

Nigel’s has been exploring the concept of New Zealand identity through his painting, print-making and sculpture for many years so the relevance of the Museum concept: a space dedicated to investigating and exploring this identity, was easily grasped.

Nigel has supplied several different design concepts for the logo and has also provided us with some of his written work and musings on the subject of identity for contemplation.

← Brief for submissions for the Museum of the Vernacular introductory exhibition
Two Thousand Cranes! →